Whilst we all like fireworks, we certainly don’t like the way it’s going on for ever this year. What’s going on? 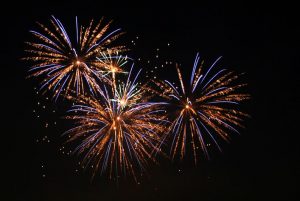 In previous years fireworks may have been let off for a week or two before 5th November, but this year they started about a month ago and are continuing even now on 11th November. It also happens to be Remembrance Day so it’s causing a lot of annoyance in the village.

Fireworks can be extremely noisy and they upset all the animals. We’ve seen there’s a campaign for silent fireworks and hope that comes into being. It’s okay to have a couple of big organised events when the noise is limited to a couple of Saturdays around the 5th, but when they go on and on it starts to cause upset and even the most tolerant get fed up.

When I was a child, Dad always did fireworks in the garden, but they were done one at time so probably didn’t cause so much stress to animals. I’m also sure they were a lot less loud! Dad would put a few rockets into milk bottles and could be seen lighting the fuse and running back to get out of the way. We had jumping jacks, that would never be allowed today as they just jumped all over the place and you had to jump out of the way. One of my favourites was the catherine wheels that were nailed to a fence and spun round, spewing out flames.

Then there were the pretty ones like Roman candles that sat on the ground and shot out lovely colours. They were pretty primitive compared to the complex fireworks we have today, but they didn’t cause the upset you hear about now.

Tree Surgery at the Smallholding